Join WeScreenplay for Cocktails & Conversation, a casual virtual series where we sit down with some of our esteemed contest jurors to chat about their journeys in the entertainment industry, specifics of the business, and advice they have for writers. Grab your favorite libation and plop down in front of your computer or tablet to attend this live-streaming Zoom event!

Up next, we’re chatting with Showrunner Monica Macer, on Wednesday, September 8th from 1pm-2pm PT. Monica currently sits on the jury for the WeScreenplay TV Pilot Competition.

Monica Macer is a screenwriter, executive producer, and showrunner of Korean and African American descent. She has written for some of the most acclaimed television series over the last 15 years, including LOST and QUEEN SUGAR. Currently, Monica is proud to serve as showrunner and executive producer for MACGYVER (CBS). Macer’s experience in television has spanned broadcast, cable, and streaming with writing and producing credits ranging from PRISON BREAK (FOX) to TEEN WOLF (MTV), NASHVILLE (ABC) to DECEPTION (NBC), and THE BREAKS (VH1). Last season, Macer served as showrunner and executive producer of Netflix’s Latinx dramedy, GENTEFIED. As showrunner of QUEEN SUGAR’s second season, Macer was tapped as one of Variety’s 10 Writers to Watch.

She currently serves on the Motion Picture Television Fund’s (MPTF) NextGen board and is a co-founder of the newly minted organization, Korean American Leaders in Hollywood. Monica was also in the inaugural class of the NetKAL (Network for Korean American Leaders) Fellowship at USC. Additionally, Macer is a 2020 Coalition of Asian Pacific (CAPE) Writing Fellows Mentor.

This event has concluded, but don’t worry! You can watch the recap here.

Interested in rewatching previous Cocktails & Conversations? We’ve got you covered!:

Join WeScreenplay for ACTIONS FOR POSITIVE CHANGE, an ongoing virtual series where we explore specific ways to amplify diversity and inclusion in screenwriting.  With accomplished guests who can speak directly from experience, we’ll examine the history that has resulted in underrepresentation, discuss visions for the future of Hollywood, ask speakers for their challenges to the industry at large, and close each conversation with concrete steps YOU can take to help move the needle.

These topics may be challenging at times, but we hope you’ll bring your ideas, personal insights, and willingness to grow as we hold space for these essential conversations. Together, we can help foster a more inclusive entertainment industry and elevate our craft at the same time.

“Writers In Their Prime: Navigating a Screenwriting Career At Any Age”

In this panel, we’ll explore tools to combat ageism by delving into best practices for leveraging your experiences and writing what you know, as well as discussing tips for how to most effectively present yourself as a writer.

Elizabeth Kaiden is a co-founder of The Writers Lab for women-identifying writers over 40, and a founding partner of Women in the Script Trade (WIST), both in partnership with Nitza Wilon. Together, they produce and manage The Writers Lab with New York Women in Film & Television, have managed script development labs for the Athena Film Festival, and they work with individual writers on script development. Elizabeth served as Head of Development for Tangerine Entertainment and has mentored at Stowe Story Labs. A former theater and film critic, she has worked in theater administration and production and in screenplay development. She is a graduate of Princeton and the Yale School of Drama and lives in New York with her family. 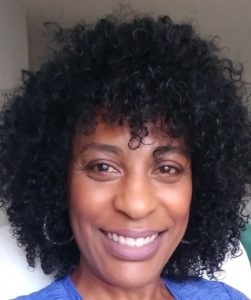 Kenyetta Raelyn is an award-winning Los Angeles-based screenwriter and filmmaker.  In 2020, she landed in the top 10% of the Nicholl Screenwriting Fellowship Competition and was one of six women chosen to participate in the Blacklist/Women in Film Episodic Lab.  Earlier in 2020 year she was invited to be a part of Blackmagic’s Future Women of TV career accelerator which introduces 12 stellar, creative women to industry showrunners and gatekeepers. In 2019, Kenyetta was a part of Meryl Streep’s Feature Writers Lab NYC and the ScreenCraft Drama Feature Competition Grand Prize Winner.  She is currently writing her first studio feature for Particular Crowd, a division of WarnerMedia International. Prior to that she wrote freelance episodes for Spotify’s True Crime podcast Hostage and she directed a digital dramedy series starring Veronica Mars’ Enrico Colantoni called Adversity. Mark & Anna Casadei are filmmakers from Nashville, Tennessee. Together, they have written numerous award-winning screenplays and short films. They are currently contracted on two romantic comedies with MPCA and recently developed a thriller/horror project that is starring Malcolm McDowell.
They are diverse in their writing styles, from sci-fi and comedies to women-in-peril thrillers to horror and family-friendly films. They draw from their diverse life backgrounds from the military, space program, culinary arts, theater and world travels living abroad in over a dozen countries. They write diverse characters and strong female leads in both features and episodic series.

to amplifying the voices of visionary women screenwriters over forty to broaden the cultural narrative through film. We are industry veterans who elevate the work of women screenwriters in their prime through mentorship, advocacy and exposure. The Writers Lab is produced by co-founders Elizabeth Kaiden and Nitza Wilon of Women in the Script Trade (WIST) and New York Women in Film & Television. It is supported by Meryl Streep, Nicole Kidman, Oprah Winfrey and the Cornelia T Bailey Foundation. It is presented in collaboration with the Writers Guild of America, East, with in-kind support from The Black List, Falco Ink, Film Fatales, Filmarket Hub, Final Draft, Roadmap Writers and Untamed Stories.

Join us for a chat about the realities and intricacies of navigating your screenwriting career at any age!

This panel has concluded, but don’t worry! You can watch the recap here.