No Fear Notes: How to Process Feedback 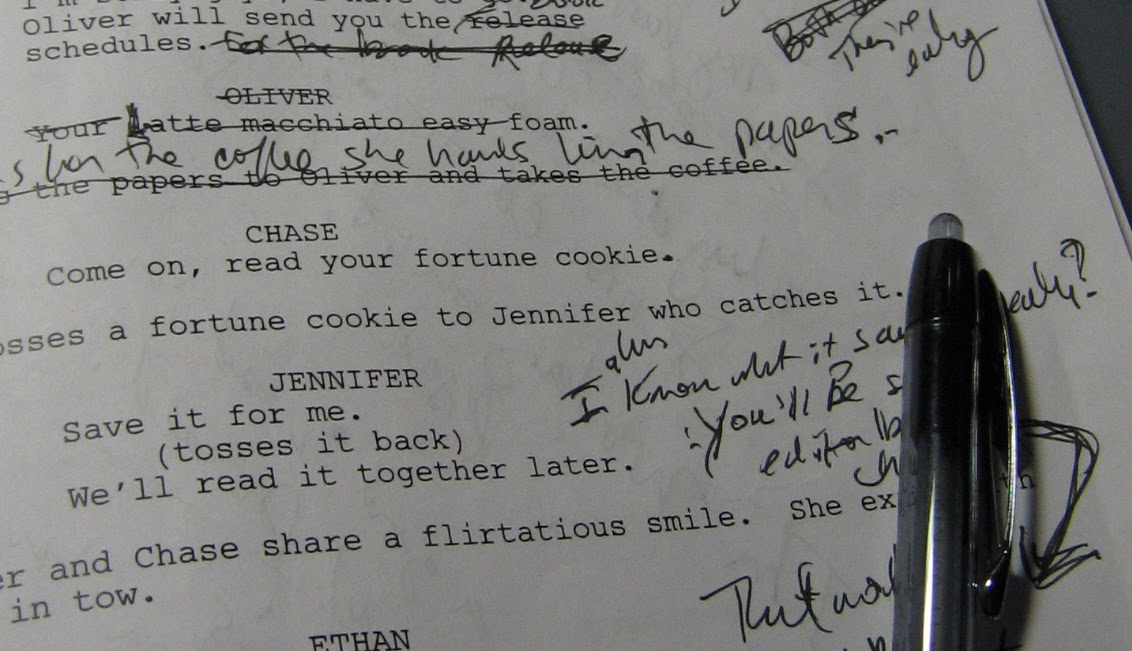 I love a fresh pair of eyes on a script. It’s always exciting. The thrill of a new perspective and the hope that they're going to return to you and say, “I loved it! It was the best thing I've ever read.” And while you're unlikely to get that sort of praise on everything you write, if you've done your job well, executives will take notice. Still, that doesn't mean you're off scott-free. Praise-worthy or not, the fact remains that there is virtually no screenplay that makes it through Hollywood completely unscathed. In other words, expect notes – and consider yourself lucky if they're constructive.

Look, critiques aren’t fun for anyone. We get it. It’s like you went out on a date with the perfect person and the next day they sent you a text of all your flaws saying, “maybe if you fix these we can go on a second date and see how things work out.” No one likes rejection and frankly as a writer I’ve gotten some notes that are just downright idiotic. Yet time and time again I’ve seen writers flare up and get defensive.

Yes, I understand your scripts are like your babies. You’ve poured your heart and soul onto the page and getting notes only shows that there is more work to be done. It’s a blow to our ego, but as writers, it’s something we must endure.

So if you have a hard time taking notes from others I’ve thought of a few suggestions that could help.

1. Be Quiet And Listen

Look, you don’t have to like taking notes. You don’t have to even like the notes, but your job is to sit, listen and at least act as though the notes you are receiving are insightful (even when they’re not). The truth is everyone in Hollywood is looking to be validated. Executives want to show that they have as much creative prowess outside of their “suit” mentality while at the same time throwing their weight as a knowledgeable businessman who’s earned his spot.

This industry is built on knowing people and people liking you. Yeah, it’s stupid but true. So if you come in defensive and explaining why notes and suggestions are wrong, you’ll quickly find yourself with a hard to work with reputation.

Not all notes make sense. Over the years I’ve found that people will disagree with certain elements that may “bump” them or aspects of the script they don’t like. I’ve found that the best thing to do with these type of notes is to come from a place of understanding.

After all, you will always get strange notes you may not understand. I find the best thing to do is not to become defensive but to ask questions.

“Can you possibly emphasize on that a little more”

Here you’re welcoming the critique. As John August and Craig Mazin have said time and time again in their Scriptnotes podcast, you are, in fact, the one there to coddle everyone else. As the writer, it is your job to make sure you make the note givers feel like you’re in control of the story and the script.

If you receive notes coming from a very defensive place, it makes others assume you are unprofessional. Take the critiques, and asking further questions about critiques make those giving them that you feel their opinion is valid — whether you actually agree with them or not.

And when you get suggestions or comments that you wholeheartedly disagree with let me arm you with the writer way of saying no. Now repeat after me, “interesting, I’ll take that into consideration.” Never shut someone down, this is a way to basically say no, but allow the person to feel like their opinion or note has been heard.  It is the perfect reply to all those “what the fuck” notes that will make you want to throw your bottled water at an executive.

Remember you’re working on a piece of art. Keep in mind I use that term loosely as I realize something like Truffaut’s 400 BLOWS and the next Michael Bay movie may differ in the opinion of what audiences consider as art. Regardless of what you’re working on, it is art — an expression of yourself — and to that tune keep in mind that as an audience their view on a piece hinders on not only taste but the baggage a reader brings with it.

I’ve seen an executive scoff at a perfectly great romantic comedy script while he was in the midst of a messy divorce. The same goes for coverage. Having been a reader I know there are days when you hate everything and you become frustrated because you know you can write scripts better than half the ones you are reading. I’ve sent the same script out to multiple readers for coverage before and a good chunk of the time it comes back positive, but every so often you will notice one piece of coverage that seems to have a grudge against you.

The one that rips it to pieces and makes you question your very talent as a writer.  The best thing you can possibly do is to examine the notes one by one. Collect data and see where your script is tripping up. My personal rule is “if more than two people tell you you’re drunk you probably are” that is to say, if more than one person is pointing out one particular flaw, that is probably a good note to take. However, if 5 people love your characters and then there’s that one curmudgeon who just doesn’t get it — go with the five people who love it. The notes aren’t always right. After all, in the end, there is no accounting for taste.

Look, this is a collaborative industry. You have to know which battles to fight and which ones to give in to. Sometimes this means taking out a favorite scene or character in your script. Maybe a joke you thought was great but no one gets. It’s just part of the process.

You will have to do this through multiple rewrites so the quicker you can be less precious about your script the better experience you will have. And the honest truth is most of the time those things you loved so much will either become something greater or come back in a later draft when others see your instincts were right the first time around. So even when you kill your darlings, don’t bury the remnants far off, as they may be resurrected again in a later draft.

5. Everyone is on your side — well almost

Believe it or not, everyone is on your side. If you are collaborating with executives, a producer or even a pesky director. They are not trying to bring down your writing, they already think you’re great after all it was your script that brought them together in the first place. In the end, you all want to make the same movie so be a team player.

Sure you may be the quarterback of the team but you’re not going to win the game without the help of your coach and teammates. Film is a collaborative medium. If you don’t want to take notes and kill your darlings, maybe it’s time you go back to that novel.

There will always be bumps. Staying true to your original vision is less about holding on to what you’ve created, and more about allowing it to grow and take shape in ways maybe you didn’t think of when you had originated your first draft. Even readers, granted many places teach their readers to say “no” to even the most solid scripts, most readers are hungry to read something good. It’s tough to do coverage on shitty scripts every day and when a few good scripts come along it is a nice change of pace and a pleasant surprise.

So do not fear dear writers, it is not you against the world — although we all feel that way — just keep on writing. And when the critiques do start rolling in, take them with poise and grace…. and then run home and scream into your pillow about how dumb everyone is. That’s the proper way to do it.