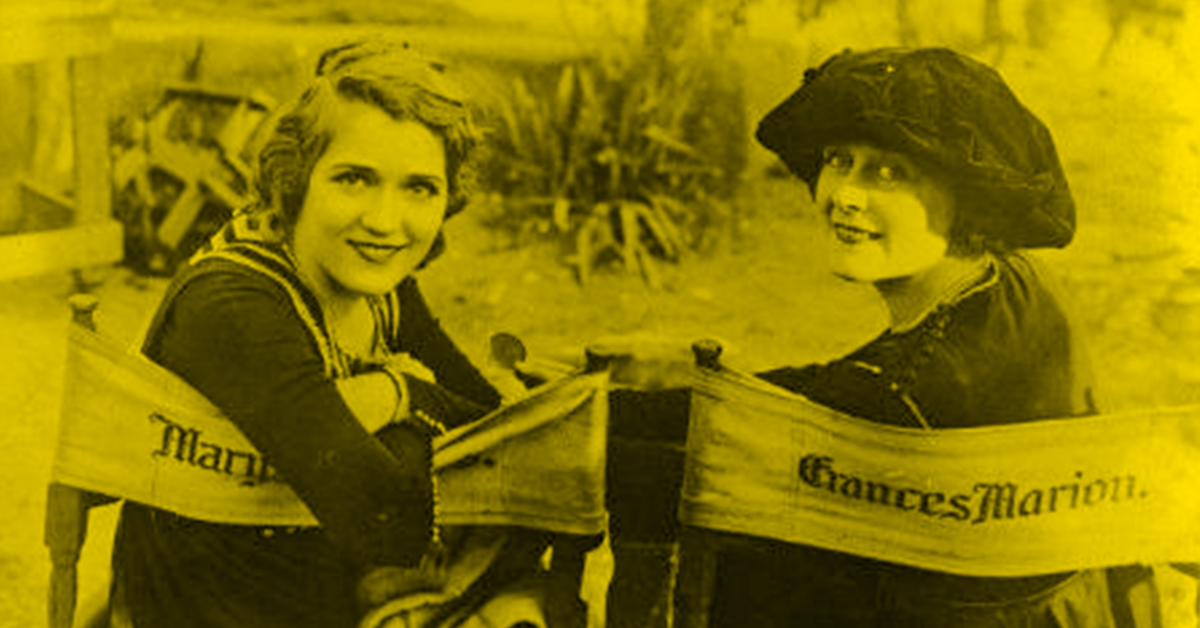 In recent years progress has been made toward inclusivity in the film industry from gender to race to sexuality. It has rippled through the whole industry, breathing life and change into a stagnant trade.

Films today are written by people with stories to tell. That hasn’t changed, but those who tell those stories have. Perspectives that were once ignored or turned away can now be heard and shared. While we still have a long way to go to get to equality in the film industry, we couldn’t be where we are now without someone taking the first step.

Here is a small sample of some great women who paved the way for others with their perseverance and pens. Marion wore several hats early in her career. She was a photographer, a commercial artist, a writing assistant, an actress, and a journalist just to name a few of her occupations. After WWI, Marion started writing films under the name “Frances Marion” including Rebecca of Sunnybrook Farm and The Poor Little Rich Girl.

By the end, Marion had been credited with writing more than 300 scripts and over 130 produced films. Her support of other women in the industry, like Mary Pickford, shows her drive to not only get over barriers, but help others over too. While Anita’s career didn’t start up right away, Anita got a job in Hollywood for the Triangle Film Corporation where she would write scripts. Few of her scripts were produced once she started, but she kept trying.

Her first success was an adaptation of Shakespeare’s Hamlet which carried over to her involvement with D. W. Griffith’s Intolerance (1916). Anita took the Triangle Film Corporation to the next level and with a handful of films, like His Picture in the Papers (1916) she made Douglas Fairbanks a star.

Soon Anita Loos became a household name like Mary Pickford. She was well-known for her wry style and witty subtitles. While writing films, she also wrote books about filmmaking including Breaking into the Movies and How to Write Photoplays.

One of her biggest successes was a collection of short stories published in Harper’s Bazaar titled: Gentlemen Prefer Blondes: The Illuminating Diary of a Professional Lady was the pinnacle of Anita’s satirical wit.

While she lost a great deal of credit to her husband and co-writer, John Emerson, we now know the full extent of her writing and can give the credit where it is due. From the beginning, she knew her dream was in stories, in writing, and she pursued it through books, short stories, films, and Broadway plays. Alice saw the Lumière brother’s Workers Leaving the Lumière Factory and knew that film was the future of storytelling. Since she currently worked at a film company as a secretary, Alice decided to get permission to try her hand at screenwriting.

After pairing narrative and film together with her first film, La Fée aux Choux (The Cabbage Fairy, 1896), Alice became the first female director, wielding her creativity both on the page and behind the camera. While breaking into this entirely new industry, Alice pioneered more than just film for women, but also employed the use of audio recordings and special effects, some the first of their time.

She took storytelling to new visual levels and charted unknown territory with ambition and curiosity, becoming a role model for filmmakers, not just women. Determined to become a screenwriter, June moved to New York early in her life. Her first script submitted to a competition didn’t win, but it did amount to job offers. Her first script, House of Tears, led June to a contract with Metro studios (soon to be MGM).

Her scripts transformed writing for films into an art form. Soon enough she became the first female executive at Metro. Her most famous works are The Four Horsemen of the Apocalypse (1921) and Blood and Sand (1922).

At the age of 35, June Mathis was the highest paid executive in Hollywood and in 1926 she was voted the third most influential woman in Hollywood. Her writing style and formatting has been the foundation of modern screenwriting. With a father who managed the local theater, Bess grew up surrounded by visual storytelling. When Bess was thirteen, she wrote for her local newspaper’s fiction column. This fueled her passion for storytelling.

Her acting career added insight to her writing as she took her scripts from the stage to the screen. Bess’s first produced screenplay was a collaboration with Wilfred Lucas called A Sailor’s Heart (1913). From there, they were given a production unit at Universal Studios where they worked on serials together. She even had input into the famous, Casablanca (1942).

Bess’s roles on films were mostly as extras and her scripts were often co-written, but her influence into other stories, finding the missing piece to make them whole made her one of the first script doctors. Someone who could diagnose a story and find where it has been neglected or needs attention. Starting out as an actress, Abbie got a taste of the intricacies of film and was fascinated by the mechanics of it. After hunting down D. W. Griffith in New York, Abbie made her first short film, Fatal Hour (1908) that Griffith directed.

Her career continued in acting as screenwriting was much more difficult for her to settle into until she found a way to do both and more. In 1913, Abbie wrote, directed, and starred in The Tarantula. The film made her the youngest director in motion picture history at twenty-seven. From then on, she cast off actress and fully embraced writer.

Some of her most notable works paired with Cecil B. DeMille were Rose of the Rancho (1914), A Romance of the Redwoods (1917), and The Woman God Forgot (1917). Abbie became one of the founding members of the Academy of Motion Picture Arts and Sciences. In 1916, Marion established the Mandarin Film Company at the age of twenty-one with the help of her uncle, Ben Lim. The film industry was still mostly undiscovered, but despite the risks, Marion did everything from writing to directing and even costume design. It was the first Asian-American based film company.

Marion’s first film was The Curse of Quon Gwon: When the Far East Mingles with the West. It was the first and only film made by an all-Chinese cast and an all-Chinese company. A story about Chinese assimilation into American society reflects the hardships Marion had to endure on top of being an enterprising woman. She was quoted saying that she had never seen a Chinese film, therefore she made one.

It was not a success, mostly due to distributors believing the film would not sell well because it was Asian-American, but did not feature the token stereotypes that Americans would expect. Her company went under shortly afterward and her uncle filed for bankruptcy.

While her film may have failed, it was still made. Marion completed the script and directed the film despite doubts or criticism from those around her. She may have fallen short, but others, women and Asian-Americans alike, have used the progress she made to help make sure future stories will be heard, no matter who writes them.

These may seem like big shoes to fill, but we have been given tools they never had in order to make significant strides forward. The best way you can help chip away at these barriers is by writing your own story and making sure it’s heard.