6 Things ‘The Farewell’ Script Can Teach You About Screenwriting When an indie film from a relatively unknown writer/director makes waves in the industry, take notice! The script is most likely a goldmine for screenwriters to witness how a writer crafted a solid foundation for the film to be built on. On the page, you get to see what they did and how they did it.

The Farewell is one of those scripts. The bilingual feature, mostly in Mandarin, is monumental on many fronts, and it started with the screenplay, written by filmmaker Lulu Wang.

Here’s a short synopsis: A headstrong Chinese-American woman returns to China when her beloved grandmother is diagnosed with terminal cancer. Billi struggles with her family’s decision to keep grandma in the dark about her own illness as they all stage an impromptu wedding to see grandma one last time.

The breakthrough dramedy was recognized by The American Film Institute as one of its top 10 films in 2019. At the Independent Spirit Awards, it won Best Feature and actress Zhao Shuzhen, who portrays Nai Nai, won Best Supporting Female. Awkwafina earned a Best Actress Golden Globe for her performance as Billi, making her the first person of Asian descent to win best lead actress for a film.

Watch the trailer below and download the script here, then read on for what you can learn as a screenwriter and filmmaker from The Farewell screenplay.

Make It An Easy Read

The Farewell is considered a bilingual script because there is both English and Chinese Mandarin in it. Most of the dialogue is Mandarin with subtitles. Conveying that on the page can get complicated, but Wang found a way to format the dialogue so the reader can easily tell what is spoken in English, what’s spoken in Mandarin and subtitled, and what dialogue isn’t subtitled.

Here’s page one of the script: 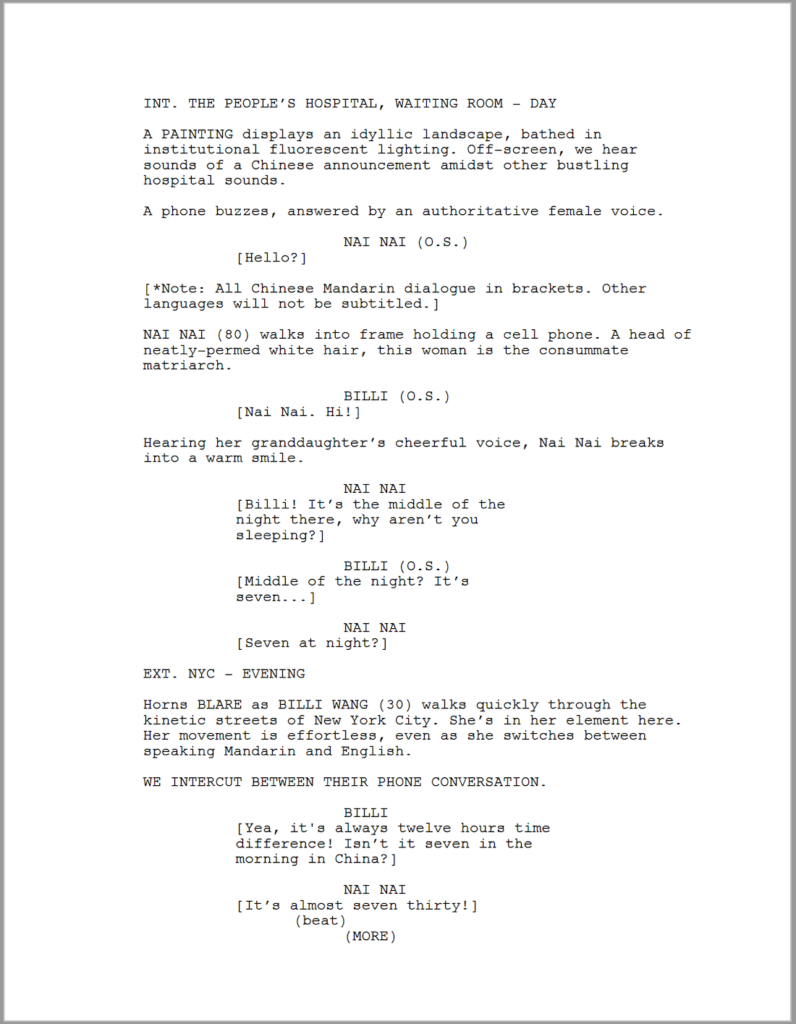 The note included on the first page makes all the difference. Wang chose to indicate when subtitled Mandarin is spoken by putting that dialogue in brackets. This makes for an easy read and a clear understanding for the reader of what we’ll hear and see on screen.

The screenplay and Billi’s journey are infused with real events from screenwriter Lulu Wang’s life. This provided authenticity in the story and a clear vision for what the filmmaker wanted to bring to the screen.

Just watching the trailer, the heart and emotion within the story are palpable. We’ve all heard the old adage to “write what you know,” and The Farewell is a stellar example of how Wang did this.

An interesting aspect of her writing process that you can learn from as a writer is what happened after she wrote the script. She shared it with her parents, who were part of the real-life events it’s based on.

Speaking during a Variety round table with other Asian creators, Wang shared her dad’s reaction to the script:

“My dad, when he read the script for the first time, he was- And I gave it to him to make sure it felt authentic. And he was like, it’s a little too authentic. I thought you would make it more interesting. Like, why would anybody want- And at this point, I already had investors and financiers and he just couldn’t understand.”

The lesson? Don’t expect others to understand why you want to tell your story, even those intimately involved in the real-life events it’s inspired by. It’s up to you as the screenwriter, the storyteller, to maintain your passion for why your story needs to be shared with the world.

For a Bilingual Script, Consult With An Expert

As Wang mentions in the Variety video above, she sent the script to her parents to help her polish it. Wang speaks both English and Mandarin, but she doesn’t write and read in Chinese. Knowing your strengths and weaknesses as a screenwriter is imperative so that you know when to bring in someone else to help you with certain aspects of your script!

In the following video, Wang compares the first and final drafts of The Farewell in Vanity Fair’s “Notes On a Screenplay” YouTube series. Definitely watch the video in full when you have the time, but check out this portion (between 01:44 to 02:29) where she explains her process of polishing the dialogue of her bilingual script:

“My mom, she did a lot of work with me on this where she would read through the Chinese dialogue and ask me, ‘Is this what you heard in your head?’ Or she would say, ‘It sounds very formal. This doesn’t sound like the way that Nai Nai speaks to you.’ We would make corrections that way.”

Wang made a brilliant decision to choose someone to help her that not only speaks, reads, and writes in Chinese but understands the story and the characters. This supported Wang to hone the dialogue for each character more specifically.

If you watch the whole video, it’s also worth noting how much consideration Wang put behind every word on the page, such as “dumb” versus “stupid,” and how it would be received by the audience.

One of the most effective plot devices that Wang incorporated into her screenplay was establishing the theme right away. Within the first two pages, it’s been introduced.

We open on a phone conversation between the protagonist, Billi, and her grandma, Nai Nai. In the very first scene, Billi and Nai Nai both lie to each other from a place of love and desire to protect each other from unnecessary worry. Check it out:

Billi fibs about wearing a hat in the cold weather, and Nai Nai lies about where she is.

This is effective, as it introduces the audience to the premise that will be explored, introduces our two main characters and their relationship, and serves as an intro to the Asian culture that is a focus in the film.

Even in Billi’s dad’s introduction, notice how the joke he tells at dinner stays with the theme of death, breaking terrible news to someone, and how to best deliver it: On almost every page from the beginning of the script, the core concept is present, slowly teasing out salient questions about whether lying is right or wrong. Wang wasted no time in bringing the audience into this main conflict for Billi, which she struggles with throughout the narrative.

It’s wonderful to see when breaking the “rules” works with a successful screenplay. Wang breaks a “rule” always repeated to screenwriters: Don’t include thoughts or feelings of characters in descriptions. Don’t direct the actor on the page. Describe visuals.

Deviating from that rule, Wang offers some details in description that aren’t purely visual, but she does so sparingly and in a way that illustrates the mood of the scene or character. Here’s an example from page 16. Billi has decided to go see Nai Nai and has just landed in China: At the end of this section, Wang describes the inner world of the protagonist, which is the kind of thing we usually see in a novel, not a script. Read it again, and this time exclude that last bit of description. The feeling of the scene isn’t as present without it.

Wang’s discernment for when non-visual details need to be included is outstanding. While details like this can inform the actor, it doesn’t necessarily direct them. It’s not a line reading. It’s focused on the mood of the scene and where we are in Billi’s emotional journey.

This is Wang’s style of writing. It doesn’t mean that you should emulate it, but rather see how the “rules” of screenwriting do not always apply. When she wrote this, Wang also knew she was going to direct the film. Her offering these details on the page is helpful for the reader (ie: a possible producer or potential actor) to know what her directorial vision is.

Stay True To Your Vision

This last lesson from Lulu Wang’s The Farewell is less about the craft of screenwriting and more about the business of it. Wang has been open about feedback she received that could have drastically changed the film she wanted to make, like changing it from a family dramedy into a broad comedy.

Being a professional screenwriter means knowing what notes to take that will support your story to bring it to greater heights and when you are compromising on your vision in a way that will alter the message you want to send.

The film being 75% subtitled was an aspect of the script that Wang encountered resistance from others on. Watch below as she talks to Variety about how it felt to stay true to her vision:

“In the beginning, I got a lot of push back, because people wanted to know if it was an American film or a Chinese film. … I guess I just didn’t make the film with those people. Because I was like, I can’t make a film where the grandmother speaks English, because I don’t know what that’s like.

… It’s completely empowering, and I think that it’s hard to quantify the value of that empowerment until you actually just feel it. And you go, ‘Oh, this is everything’. Like, I can actually create from the core of my being when I create boundaries and I know what my space is, as opposed to not having a defined space and feeling like you kind of have to mutate in order to fit in.”

One of the signs of a terrific script is that it can make you laugh and make you cry. You forget that you’re even reading a script. It takes you on a journey in the same way as reading a book does. The Farewell is one of those scripts and absolutely worth the read to see how a diverse indie feature screenplay is expertly crafted on the page.